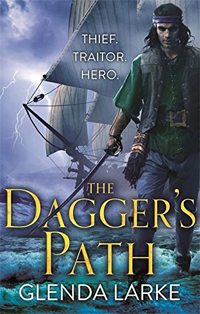 Steve Stone for The Dagger’s Path by Glenda Larke  (Orbit)

Steve Stone received a formal art education at Nottingham university in the eighties and has worked commercially as a digital artist from his studio in North Yorkshire, England since 1996. He works extensively in the publishing, computer game and advertising industries in both England and the United States.

He lives with his wife Sian, daughter Claudia and son Oliver.