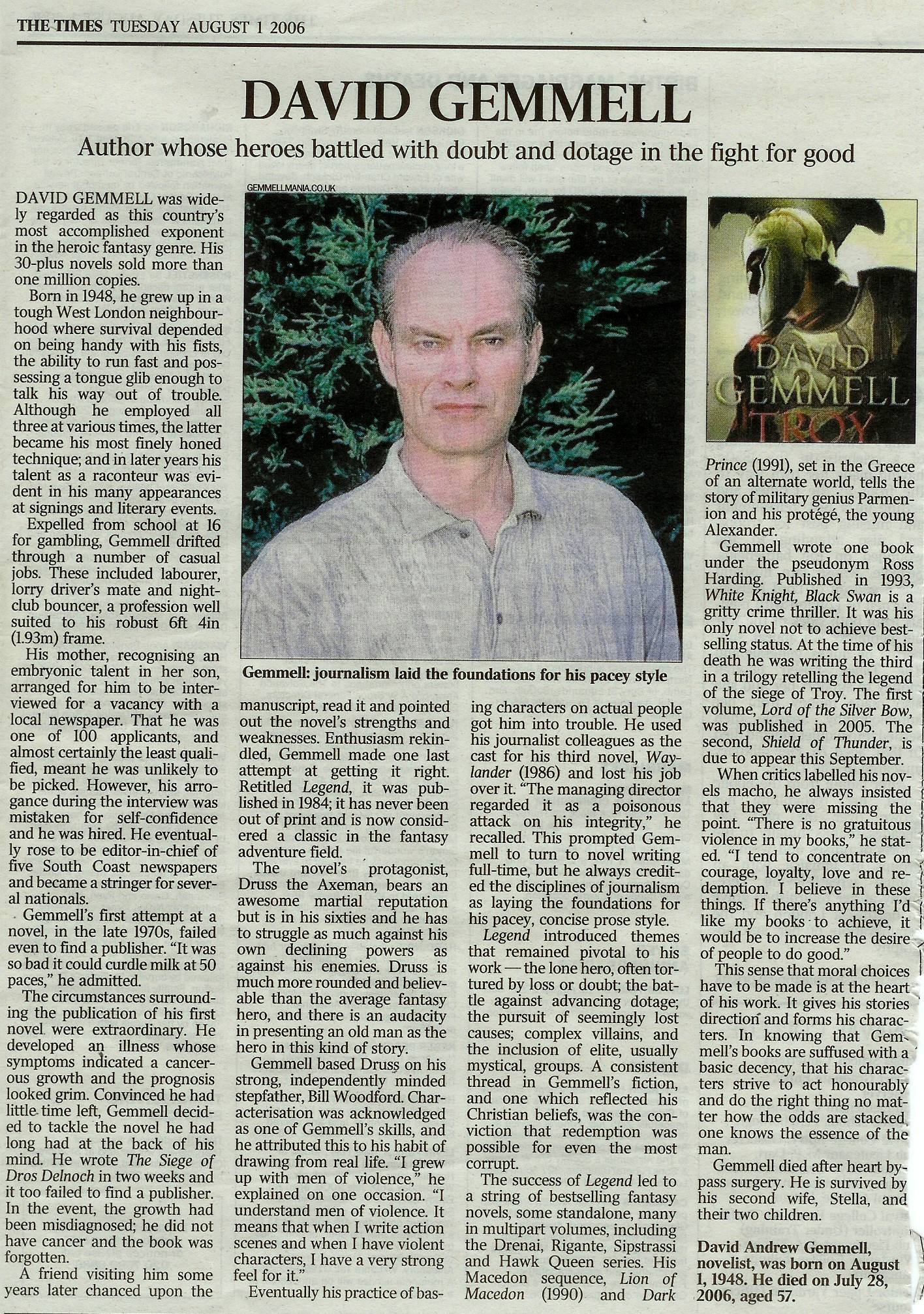 Obituary by Stan Nicholls from The Times, 1st August 2006

David Gemmell, who has died following heart bypass surgery, produced thirty bestselling novels, and is widely regarded as this country’s most accomplished author in the heroic fantasy genre.  He grew up in a tough West London neighbourhood where survival depended on being handy with your fists, the ability to run fast, or possessing a tongue glib enough to talk your way out of trouble.  Although he employed all three at various times, the latter became the most finely honed weapon in his armoury; and in later years his talent as a raconteur and teller of anecdotes characterised his many personal appearances at signings and literary events.

Expelled from school at sixteen for gambling, Gemmell entered the world of work with little in the way of vocational skills and drifted through a number of casual jobs.  These included labourer, lorry driver’s mate and nightclub bouncer; a profession well suited to his robust six foot, four inch frame.

His mother, despairing at this waste of potential and recognising an embryonic talent in her son he wasn’t aware of himself, arranged for him to be interviewed for a vacancy with a local newspaper.  He wasn’t keen and went just to please her.  The fact that he was one of a hundred applicants, and almost certainly the least qualified, virtually guaranteed he wouldn’t be picked.  To be absolutely sure, he behaved arrogantly during the interview.  This was mistaken for self-confidence and he was hired.  He eventually rose to Editor-in-Chief of five South Coast newspapers and became a stringer for several nationals.

In the late ‘70’s Gemmell turned his hand to writing a thriller.  But The Man From Miami, a novel about an assassin, failed to find a publisher.  ‘It was so bad it could curdle milk at fifty paces,’ he later admitted.

The circumstances surrounding the publication of his first novel were extraordinary.  He developed an illness that had him passing blood, suffering from exhaustion and losing two stone in weight; symptoms indicating a cancerous growth.  His doctor ordered tests and the prognosis looked grim.  Convinced he had little time left, Gemmell decided to tackle the novel he had long had at the back of his mind.  He turned out The Siege of Dros Delnoch in two weeks.  No one wanted to publish it.  In the event, the growth had been misdiagnosed; he didn’t have cancer.  The book was forgotten.

A friend visiting his home a couple of years later chanced upon the manuscript and read it.  Fortunately this friend had an incisive eye, and pointed out the novel’s strengths and weaknesses.  Enthusiasm rekindled, Gemmell made one last attempt at getting it right.  Retitled Legend, it was published in 1984 and has never been out of print.

Considered a classic in the fantasy adventure field, Legend is set in the dying days of the mighty Drenai empire.  Its rulers, steeped in complacency and incompetence, fail to respond decisively when the warrior tribes of the Nadir unite against them.  In seeking to appease charismatic Nadir leader Ulric, the Drenai succeed only in conveying their weakness and encouraging his ambitions.  All that stands between the Nadir hordes and the heart of empire is Delnoch Pass.  This is protected by a massive dros, or fortress, but its vastly outnumbered defenders are plagued by hopelessness and shambolic leadership.  It’s left to a disparate assembly of individuals, not all immediately recognisable as heroic, to hold the pass and deny chaos its triumph.

The novel’s central protagonist, Druss the Axeman, is nearing the end of his active life.  A legendary figure – the book’s title partly refers to him – he bears an awesome martial reputation.  Now in his sixties, and subject to the ailments encroaching age brings, he has to put as much effort into mustering his own declining powers as commanding the defence.  For him, time is as big an enemy as the Nadir.  Druss is considerably more rounded and believable than the average fantasy hero, and there is an audacity in presenting an old man as the hero in this kind of story.  But it works perfectly in engaging the reader’s empathy.

Gemmell based Druss on his strong, independently minded stepfather, Bill Woodford.  Characterisation is acknowledged as one of Gemmell’s major skills, and he attributed this to the fact that he frequently drew from real life.  ‘I grew up with men of violence,’ he explained on one occasion.  ‘I understand men of violence.  It means that when I write actions scenes and when I have violent characters, I have a very strong feel for it.’  But his practice of basing characters on actual people got him into trouble.  He used his journalist colleagues as the cast for his third novel, Waylander, published in 1986, and lost his job over it.  ‘The managing director regarded it as a poisonous attack on his integrity,’ he recalled.  This prompted Gemmell to turn to novel writing full-time, but he always credited the disciplines of journalism as laying the foundations for his pacey, concise prose style.

Legend instigated themes that remained pivotal to his work – the lone hero, often tortured by loss or doubt; the battle against advancing dotage; the pursuit of seemingly lost causes; complex villains, and the inclusion of elite, usually mystical, groups.  A consistent thread in Gemmell’s fiction, and one which reflected his Christian beliefs, was the conviction that redemption was possible for even the most corrupt.

The success of Legend led to a string of bestselling fantasy novels, some standalone, many in multipart volumes, including the Drenai, Rigante, Sipstrassi and Hawk Queen series.  His Macedon sequence, Lion of Macedon (1990) and Dark Prince (1991), set in the Greece of an alternate world, tells the story of military genius Parmenion and his protégé the young Alexander, future ruler of the ancient world’s greatest empire.

Gemmell wrote one book under a pseudonym.  Published in 1993 as by “Ross Harding”, White Knight, Black Swan is a gritty crime thriller.  It was his only novel not to achieve bestselling status.  At the time of his death he was writing the third in a trilogy retelling the legend of the siege of Troy.  The first volume, Lord of the Silver Bow, was published in 2005.  The second, Shield of Thunder, is due to appear this September.

Some critics labelled his novels macho.  He always insisted that they were missing the point.  ‘There is no gratuitous violence in my books,’ he stated.  ‘I tend to concentrate on courage, loyalty, love and redemption.  I believe in these things.  If there’s anything I’d like my books to achieve, it would be to increase the desire of people to do good.’

This sense that moral choices have to be made is at the heart of his work.  It gives his stories direction and forms his characters.  In knowing that David Gemmell’s books are suffused with a basic decency, that his characters strive to act honourably and do the right thing no matter how the odds are stacked, one knows the essence of the man.

He is survived by his second wife, Stella, and two children, Kate and Luke.

A tall figure, broad at the shoulder and narrow at the hip, stood poised in a doorway, wearing a wide-brimmed hat just like the hero of his Shannow novels.  It was Dave Gemmell, who lived as he wrote.  Not the guns, mind, but the stance against injustice.    He lived by the code he described: for evil to triumph, all that is needed is for good men to stand back and do nothing.

You didn’t have to know him in person to know what he was like.  You could read any of his thirty best-sellers and get a pretty good picture of him.  A flawed hero, who could be arrogant and intransigent, a poseur who who bestrode two worlds, that of the man of violence and the other of gentle poets.

Dave grew up in a rough part of West London, a lonely soul whose mother was nicknamed Lady Woodford because she spoke in refined accents.  Then she married Dave’s stepfather Bill, a square-set man at the edge of the criminal underworld.  He took the little boy in hand, showed him how to defend himself and how to talk to people so he wouldn’t get pushed around.  Bill found him shady jobs with good pay when he was thrown out of school for gambling.

But Lady Woodford believed her son had greater potential.  She bought him a suit and to please her he went to an interview for twenty trainee journalists, a job he had no intention of taking.  So when the editor asked him where he saw himself in five years’ time, Dave put his feet on the desk and said, “How much are you earning?  Right, I want to be where you are.”  As Dave had intended, the editor didn’t want him on the staff.  But due to losing his notes, the editor gave the positions to those of the hundred candidates whose names he remembered.  He wasn’t best pleased months later when he found he’d hired the rude, pushy lad he’d meant to turn down.

Nevertheless it was a good decision.  Soon Dave rose to become the editor-in-chief of five newspapers on the south coast of England.  For years he hankered to be a novelist but it was only when he was mistakenly diagnosed with cancer that he finished his first novel.  It was dreadful, as he freely admitted, but a friend told him how to make his characters more real, less black and white.  And that was Legend, which has never been out of print since its publication in 1984.

In his personal life Dave was a husband and father, a man of wide interests and strong views, and a wonderful friend.  Ever supportive, he gave advice and encouragement to new writers, helped fund athletes’ training, worked with a local writers’ foundation set up in Susses where he lived, and regularly supported several charities. A criminal known as Half-hand Jimmy once told me how much Dave’s visits to prisoners helped, because Gemmell showed how a hard man from a hard background could make good choices.

I remember him best sipping champagne, laughing and vital, by a crackling fire, happy to share the fruits of his success.  The man is gone, but he lives on in his works, both worldly and literary. And in the David Gemmell Awards for Fantasy, now in its seventh year of fostering literary and artistic talents within heroic fantasy.