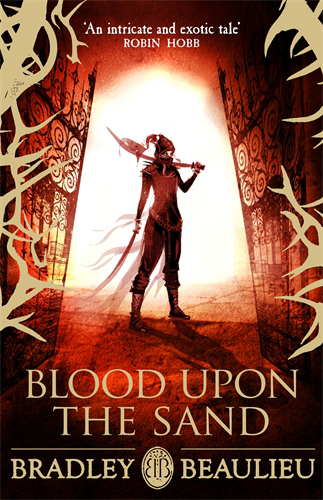 Blood Upon The Sand, Bradley Beaulieu
Book Two of The Song Of The Shattered Sands (Gollancz)

Ceda, now a Blade Maiden in service to the kings of Sharakhai, trains as one of their elite warriors, gleaning secrets even as they send her on covert missions to further their rule. She knows the dark history of the asirim–that hundreds of years ago they were enslaved to the kings against their will–but when she bonds with them as a Maiden, chaining them to her, she feels their pain as if her own. They hunger for release, they demand it, but with the power of the gods compelling them, they find their chains unbreakable.

Ceda could become the champion they’ve been waiting for, but the need to tread carefully has never been greater. After their recent defeat at the hands of the rebel Moonless Host, the kings are hungry for blood, scouring the city in their ruthless quest for revenge. Ceda’s friend Emre and his new allies in the Moonless Host hope to take advantage of the unrest in Sharakhai, despite the danger of opposing the kings and their god-given powers, and the Maidens and their deadly ebon blades.

When Ceda and Emre are drawn into a plot of the blood mage Hamzakiir, they learn a devastating secret that may very well shatter the power of the hated kings. But it may all be undone if Ceda cannot learn to navigate the shifting tides of power in Sharakhai and control the growing anger of the asirim that threatens to overwhelm her…

Bradley P. Beaulieu began writing his first fantasy novel in college, but in the way of these things, it was set aside as life intervened. As time went on, though, Brad realized that his love of writing and telling tales wasn’t going to just slink quietly into the night. The drive to write came back full force in the early 2000s, at which point Brad dedicated himself to the craft, writing several novels and learning under the guidance of writers like Nancy Kress, Joe Haldeman, Tim Powers, Holly Black, Michael Swanwick, Kij Johnson, and many more.

Brad and his novels have garnered many accolades and most anticipated lists, including two Hotties – the Debut of the Year and Best New Voice – on Pat’s Fantasy Hotlist, a Gemmell Morningstar Award nomination for The Winds of Khalakovo and more.