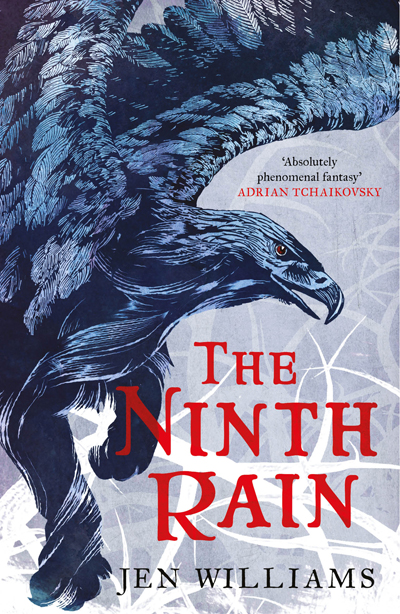 The Ninth Rain, Jen Williams
Book One of The Winnowing Flame Trilogy (Headline)

The great city of Ebora once glittered with gold. Now its streets are stalked by wolves. Tormalin the Oathless has no taste for sitting around waiting to die while the realm of his storied ancestors falls to pieces – talk about a guilt trip. Better to be amongst the living, where there are taverns full of women and wine.

When eccentric explorer, Lady Vincenza ‘Vintage’ de Grazon, offers him employment, he sees an easy way out. Even when they are joined by a fugitive witch with a tendency to set things on fire, the prospect of facing down monsters and retrieving ancient artefacts is preferable to the abomination he left behind.

But not everyone is willing to let the Eboran empire collapse, and the adventurers are quickly drawn into a tangled conspiracy of magic and war. For the Jure’lia are coming, and the Ninth Rain must fall…

Jen Williams lives in London with her partner and their cat. A fan of pirates and dragons from an early age, these days she writes character-driven sword and sorcery novels with plenty of banter and magic, and in 2015 she was nominated for Best Newcomer in the British Fantasy Awards. The Copper Cat trilogy, consisting of The Copper Promise, The Iron Ghost and The Silver Tide, are available now in the UK and the Netherlands.