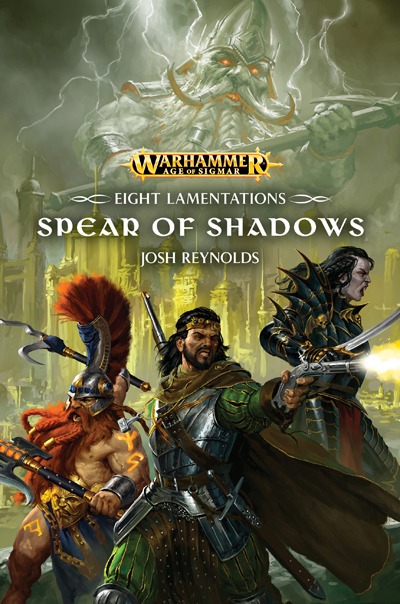 A band of mortal heroes are sent by the duardin god Grungni to retrieve an artefact of dark power and keep it from the clutches of Chaos.

In the beginning, there was fire. And from that fire came eight weapons of terrible power, honed to a killing edge by the chosen weaponsmiths of Khorne. Now, as the Mortal Realms echo with the thunder of war, the great powers seek to acquire the eight wherever they might be found, no matter the cost. In a city of prophecy and secrets, Grungni, smith-god of the duardin, gathers together a group of mortal warriors from across the realms in order to locate the first of the eight weapons. But they are not alone in their quest; agents of the Ruinous Powers search for the weapon for themselves. Now the race is on, as man, duardin and daemon alike seek to claim the Spear of Shadows…

Josh Reynolds is a freelance writer of moderate skill and exceptional confidence. He has written quite a bit, and some of it was even published. For money. By real people.