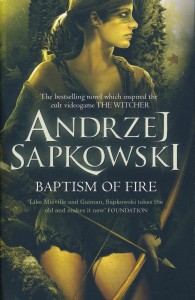 This novel continues the tale of Geralt, the Witcher, and his rag-tag group of allies as they search for Ciri – Geralt’s ward and the key to a prophecy which might mean the end of civilisation. Following on from the events of The Time of Contempt, we learn more about Geralt’s past – and how short his future might be.

The Wizards Guild has been shattered by a coup and Geralt seriously injured. The Witcher is supposed to be a guardian of the innocent, a defender against powerful and dangerous monster that prey on men.

War rages across the land, the future of magic is under threat and those sorcerers who survive are determined to protect it. It’s an impossible situation in which to find one girl – Ciri, the heiress to the throne of Cintra has vanished – until a rumour places her in the Nilfgaard court, preparing to marry the Emperor.

Andrzej Sapkowski was born in 1948 in Poland. He studied economy and business, but the success of his fantasy cycle about the sorcerer Geralt of Rivia turned him into a bestselling writer and he is now one of Poland’s most famous and successful authors, selling more in his own country than Stephen King or Michael Crichton.