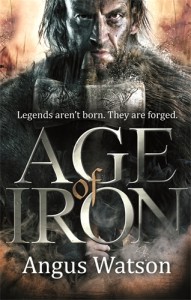 Bloodthirsty druids and battle-hardened Iron Age warriors collide in the first volume of this action-packed historical fantasy trilogy which will appeal to fans of Joe Abercrombie and HBO’s Game of Thrones.

Dug Sealskinner is a down-on-his-luck mercenary travelling south to join up with King Zadar’s army. But he keeps rescuing the wrong people.

First, Spring, a child he finds scavenging on the battlefield, and then Lowa, one of Zadar’s most fearsome warriors, who’s vowed revenge on the king for her sister’s execution.

Now Dug’s on the wrong side of that thousands-strong army he hoped to join – and worse, Zadar has bloodthirsty druid magic on his side. All Dug has is his war hammer, one rescued child and one unpredictable, highly-trained warrior with a lust for revenge that’s going to get them all killed . . .

It’s a glorious day to die.

In his twenties, Angus Watson’s jobs ranged from forklift truck driver to investment banker. He spent his thirties on various assignments as a freelance writer, including looking for Bigfoot in the USA for the Telegraph, diving on the scuppered German fleet at Scapa Flow for the Financial Times and swimming with sea lions off the Galapagos Islands for the Times. Now entering his forties, Angus lives in London with his wife Nicola and baby son Charlie. As a fan of both historical fiction and epic fantasy, he came up with the idea of writing a fantasy set in the Iron Age when exploring British hillforts for the Telegraph, and developed the story while walking Britain’s ancient paths for further articles.