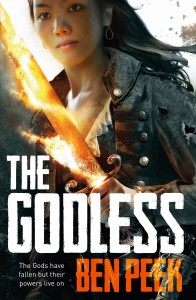 “Mostly, when I was a kid I had loved all the fantasy books being published. Margaret Weis and Tracy Hickman, David Eddings, and all of that.  Around the time I was up in Darwin for a friend’s wedding, and she and I were driving round one day, and I was daydreaming in the car – there is a lot of empty space in Darwin – and I had this idea for a world filled with dead gods and immortals fighting, and when I came home, I thought I’d write it. I thought I’d write a big fantasy book like I read as a kid, but fill it with all the stuff I liked as an adult – race, religion, sword fights, cool weird things, and big fantasy madness – and I went from there.”

Fifteen thousand years after the War of the Gods and their corpses now lie scattered across the world, slowly dying as men and women awake with strange powers that are derived from their bodies. While some see these powers as a gift – most call them a curse.

When Ayae, a young cartographer’s apprentice in the city of Mireea, is trapped in a burning building she is terrified as this dormant power comes to life within her. The flames destroy everything around her but she remains unscathed – fire cannot touch her. This curse makes her a target for the army marching on her home – an army determined to reclaim the corpse of the God Ger, who lies dying beneath the city, and harness his power for themselves.

Zaifyr, a man adorned in the ancient charms, also arrives in Mireea. His arrival draws the attention of two of the ‘children of the gods’, Fo and Bau, powerful, centuries old beings who consider themselves immortal. All three will offer different visions for Ayae’s powers – and whatever choice she makes will result in new enemies.

My first fantasy novel was Dragon’s of Autumn Twilight by Margaret Weis and Tracy Hickman and it remains, with all the perfection that a twelve year old can give it, the bestest book, ever. In fact, it’s a bit like Star Wars for me. I loved Star Wars as a kid and I loved the Chronicles and even though I can look back at them now and see that they’re far from perfect books (and in the cast of Star Wars, films) I still get a huge nostalgia rush whenever I see editions of the books, especially if they have those old painted covers Larry Elmore did for them.

I would probably have to say Michael Moorcock’s Elric of Melnibone. I came across it when I was about eighteen or something similar, and I had no idea what I was in for in terms of the Eternal Champion or anything like that. I had simply heard he was a tragic hero who would be responsible for the death of his friends. It was that, of course, but it was so much more, so much more ambitious than anything I had read before.

Diversity, to be honest. That’s what I like to see on covers and that’s what puts me off when it’s not there.

It’s a bit disheartening to walk into a book store and see rows and rows of books and realise that they’re rows and rows of white people. Or to look at a series of new releases online and see the same thing. I just – it’s a big, multicultural world out there, y’know? It’s not hurting anyone to show that.

I’m a lot less about themes now than I am about the quality of the writing in the first few pages. That said, I tend to gravitate to the big, huge battles with nations at war – I’ll leave them there if they don’t pass the prose test on the first pages, but still.

The lifetime series. I mean, sure, we see it occasionally, but I look forward to editors and agents and publishers sneaking into nurseries in the next few years, and stealing babies so that they can hot house them and sell them to the public, twenty, thirty years later, as authors who will produce fantasy novels for the rest of their lives. One book every year in a series with no end, no conclusion, and no politics to offend you at all (except, perhaps, for that stolen children thing – I mean, you know, you might be offended by that).

Anyhow: I think it’s been happening already. I think the publishing industry is ready to unleash these poor, malnourished children who will write 1000 page epics once a year, dead eyed and fed through a tube.

Personally, I think it’ll be exciting.

Or, you know, terrible and sad. But that’s art for you, really. Either it’s ground breaking and amazing or terrible and tragic.

Ben Peek is the critically acclaimed author of The Godless and three previous novels Black Sheep, Twenty-Six Lies/One Truth, and Above/Below, co-written with Stephanie Campisi. He has also written a short story collection, Dead Americans. In addition to this, Peek is the creator of the short-lived psychogeography pamphlet, The Urban Sprawl Project. With the artist Anna Brown, he created the autobiographical comic Nowhere Near Savannah. He currently lives in Sydney with his partner, the photographer Nikilyn Nevins, and their cat, Lily.