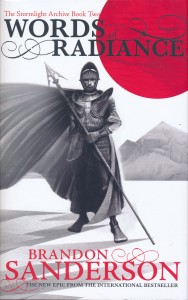 Return to the hurricane swept world of Rosharr. As the world tips into a war for control of the mythical artifacts of power made from Shard, characters are swept up into new dangers which will threaten their integrity and their lives.

The Knights Radiant must stand again.

The ancient oaths have at last been spoken; the spren return. Men seek that which was lost. I fear the struggle will destroy them.

It is the nature of the magic. A broken soul has cracks into which something else can be fit. Surgebindings, the powers of creation themselves. They can brace a broken soul; but they can also widen its fissures.

The Windrunner, lost in a shattered land, balanced upon the boundary between vengeance and honor.
The Lightweaver, slowly being consumed by her past, searching for the lie that she must become.
The Bondsmith, born in blood and death, striving to rebuild what was destroyed.
The Explorer, straddling the fates of two peoples, forced to choose between slow death and a terrible betrayal of all she believes.

It is past time for them to awaken, for the Everstorm looms.

And the Assassin has arrived.

Brandon Sanderson was born in Nebraska in 1975. Since then he has written the Mistborn series, amongst others, become a New York Times bestselling author and been hailed as the natural successor to Robert Jordan. He lives in Utah.