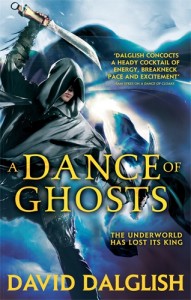 The fifth novel in an electrifying new fantasy series of assassins

A Dance of Ghosts

What lies ahead for Haern and the city of Veldaren? Nothing but trouble that’s for sure.

A night of fire and blood heralds Muzien the Darkhand’s arrival to Veldaren. With him comes the might of the Sun Guild, eager to spread their criminal empire.

Left blind after being attacked by the Widow, Alyssa Gemcroft struggles to hold together the remnants of the Trifect as the Sun Guild’s arrival threatens to shatter whatever future her son might have left.

Veldaren’s only hope is in the Watcher, but Haern is no longer there. With his father, Thren Felhorn, he is traveling to the Stronghold, an ancient bastion of the dark paladins of Karak. Will they find the answers they seek? Or will the Stronghold be their final destination?

Killer or savior; the line can no longer remain blurred.

David Dalglish currently lives in rural Missouri with his wife Samantha, daughter Morgan and dog Asimov. He graduated from Missouri Southern State University in 2006 and currently devotes himself to perfecting his craft. He spends his free time playing racquetball and watching PBS with his daughter.