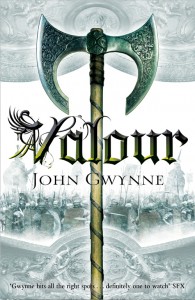 “It is still a very surreal experience for me, seeing a book that I’ve imagined for so long in my mind turned into paper and pages and artwork, sitting on a real bookshelf amongst authors that I love.”

The Banished Lands are torn by war as the army of High King Nathair sweeps the realm challenging all who oppose his holy crusade. Allied with the manipulative Queen Rhin of Cambren, there are few who can stand against him. But Rhin is playing her own games and has her eyes on a far greater prize . . .

Left for dead – her kin have fled and her country is overrun with enemies – Cywen fights to survive. But any chance of escape is futile once Nathair and his disquieting advisor Calidus realize who she is. They have no intention of letting such a prize slip from their grasp. For she may be their one chance at killing the biggest threat to their power.

Meanwhile, the young warrior Corban flees from his conquered homeland with his exiled companions, heading for the only place that may offer them sanctuary. But to get there they must travel through Cambren, avoiding warbands, giants and the vicious wolven of the mountains. And all the while Corban struggles to become the man that everyone believes him to be – the Bright Star and saviour of the Banished Lands.

Embroiled in struggles for power and survival, the mortal world is unaware of the greatest threat of all. In the Otherworld, dark forces scheme to bring a host of the Fallen into the world of flesh to end the war with the Faithful, once and for all.

The Book of Three by Lloyd Alexander was the first fantasy book I remember, and was certainly the one that hooked me into that slippery slope towards Middle Earth and all things fantastical. A wonderful blend of Welsh mythology and rip-roaring adventure. I was eight and I have a very clear memory of my school teacher gathering up the class, sitting us down and beginning to read.

Gemmell’s Sword in the Storm. Its protagonist, Connavar, is so wonderfully flawed, human and conflicted, and yet still manages to become a hero. That moment when he turns to stand over his friend and face the great bear that’s chasing them still gives me goosebumps. A truly wonderful character. Also I remember being blown away with how Gemmell wrote about disability – something that was pretty rare back when the book was written. It was honest without being sentimental, and all the more moving because of that.

I’m probably a bit old school here, I grew up on Conan novels and Boris Vallejo artwork. I also love the artwork you see over the credits at the end of Peter Jackson’s interpretation of The Return of the King, those sketches of all of the characters. I love them! What I’m not so keen on is photographed models in hooded cloaks – It seems to be a trend recently but it doesn’t really move me. I like artwork to feel like a painting, or a drawing, not a photograph. Call me old fashioned 🙂

I do like a good sword. Or axe. Or spear.

Fantasy and history have always had a close relationship, history often forming a skeleton or frame of reference for an author to mold their fantasy world upon. This seems to be a growing occurence, with titles like Miles Cameron’s Red Knight based loosely on a mercenary company from the 100 Years War, only hunting wyverns and not Frenchmen, or Brian McClellan’s Powdermage Trilogy inspired by the French Revolution, complete with muskets, a la Sharpe. As well as fantasy I read a lot of historical fiction – Cornwell, Iggulden, Scarrow and so on, so this trend makes me very happy indeed, a blending of my two favourite genres.

And, of course, Evil Elves!

John Gwynne studied and lectured at Brighton University. He’s been in a rock ’n’ roll band, playing the double bass, travelled the USA and lived in Canada for a time. He is married with four children and lives in Eastbourne, running a small family business rejuvenating vintage furniture. His first novel, Malice, won the David Gemmell Morningstar award for best debut fantasy. Valour is his second novel.