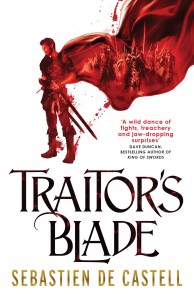 A background in sword choreography doomed Sebastien to write books about swashbuckling heroes who get their asses handed to them. Occasionally there’s a talking raccoon with a propensity for blackmail and murder thrown in for good measure.

Falcio is the first Cantor of the Greatcoats. Trained in the fighting arts and the laws of Tristia, the Greatcoats are travelling Magisters upholding King’s Law. They are heroes. Or at least they were, until they stood aside while the Dukes took the kingdom, and impaled their King’s head on a spike.

Now Tristia is on the verge of collapse and the barbarians are sniffing at the borders. The Dukes bring chaos to the land, while the Greatcoats are scattered far and wide, reviled as traitors, their legendary coats in tatters.

All they have left are the promises they made to King Paelis, to carry out one final mission. But if they have any hope of fulfilling the King’s dream, the divided Greatcoats must reunite, or they will also have to stand aside as they watch their world burn…

The novel Bard by Keith Taylor was so full of enchantment and swashbuckling adventure that it started me on a career of music, writing and the occasional swordfight.

Nine Princes in Amber, which in and of itself is a short novel but becomes part of the epic Chronicles of Amber, was the first book I’d read that fearlessly blended traditional fantasy tropes with elements of sci-fi, noir and family drama. Roger Zelazny told big stories in small packages, using prose that was both vivid and economical.

A great fantasy novel cover does for me what old record album covers used to do – it gives me a picture I can get lost in for ages as I relive the story captured inside. I want evocative imagery and to see the intent of the cover designer come through all the little choices of colour, composition and typography. What turns me off is evidence of someone getting silly with Photoshop filters.

What classic fantasy themes always get your interest on the cover or in the write-up of a new book? Any pet hates?

The promise of mystery is usually what draws me in – whether that be a sword that shouldn’t exist or a person who isn’t who they seem to be. I don’t read a lot of books about elves or wizards but if you can point me to one where I’ll be focused on the character and not the fact that they’re an elf or a wizard then I’m in. My biggest pet peeve is ‘the chosen one’. It’s not that it can’t be done well – in fact, many authors have done it brilliantly – it just takes a lot for me to want to start reading one of those stories.

I want to read epic fantasy that’s personal. I want to experience the story from inside a character struggling with the events unfolding around them rather than watching from a mountaintop as great battles unfold. Those big events are most fascinating to me when the main character isn’t even sure of the scale of what’s happening and is seeing the world through the same limitations as the rest of us. I like hitting the end of a chapter and thinking, ‘Wow . . . that guy is screwed.’

Sebastien de Castell had just finished a degree in Archaeology when he started work on his first dig. Four hours later he realised how much he hated archaeology and left to pursue a very focused career as a musician, ombudsman, interaction designer, fight choreographer, teacher, project manager, actor, and product strategist. He lives in Vancouver, Canada, with his wife.