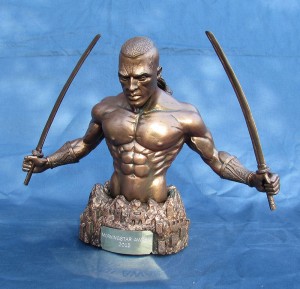 The Morningstar Award, taking its name from one of David Gemmell’s bestselling novels, honours the author judged, by open vote, to have made the year’s best debut in fantasy fiction.

The Morningstar trophy is specially made by artist Lee Blair, who also created our Ravenheart trophy.

Voting on 2017’s Morningstar longlist opens at midday on Friday 17th February and closes at midnight on Friday 31th March.

Voting on the shortlist opens at midday on Friday 21st April and closes at midnight on Friday 2nd June.

The presentation takes place on the evening of Saturday 15th July at Edge-Lit 6, Derby UK.  http://www.derbyquad.co.uk/film/edge-lit-6.aspx